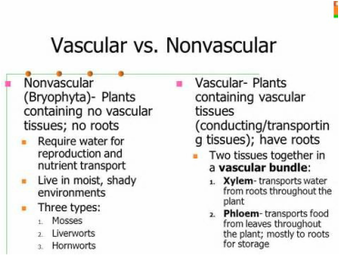 Non Vascular Plants
Plants which do not have vascular systems are called non vascular plants or lower plants. They have special tissues for the movement of water throughout the plant. Liverworts, mosses, and hornworts belong to non vascular plant group. Since there are NO vascular tissues, they do not have true stem, root system or leaves. Also, non vascular plants do not contain a wide variety of specialized tissues. Therefore, some plants in this group look like leaves (liverworts). Also, some plants have root like structures. Because of the lack of water transporting tissues, these plants cannot grow high. Also, these plants cannot tolerate drought (lack of water). But, they can absorb water from the surrounding air or nearby sources through surface tissues. Habitats of these plant groups are swamps, bogs and near water sources. All types of plants in this group have uniform life cycles.
​